The Alpha Trading Office is more than just a place for the secretary to hang out in. 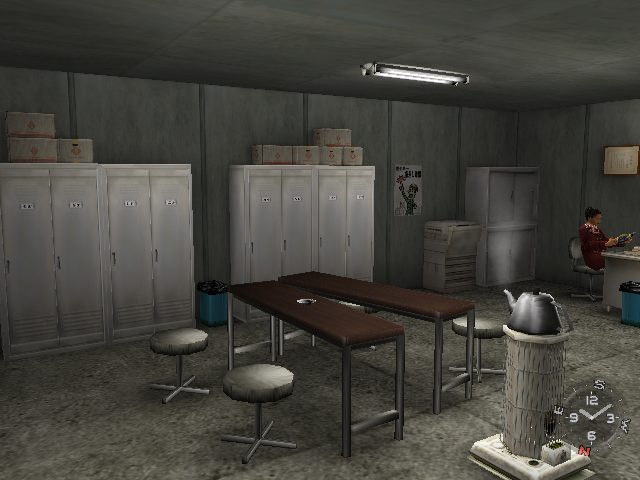 It's also a break room for the foremen and has lockers for them. Which one belongs to who?

The are eight lockers in two packs of four, neatly stacked next to each other, each one with a little name plate, showing who they belong to. Naturally these are all in Japanese and the game doesn't provide subtitles for these little details. It's up to the players to figure this out so let's break it down into those packs.

Ryozo Yada should be instantly familiar, but since the other names are most likely to no use for most players, let me go into more detail about who they are.

Tomohito Niizato and Taiki Nimura are the two foremen who hang out near Warehouse No. 1 after work and often have some important information for Ryo, if he decides to talk to them.

And lastly Akihiro Ishida is a worker who can be seen in various places, as his job is to deliver documents around the area.

Again from left to right you can read: Muraoka - Kayama - Sunaga - Michii

Tadashi Muraoka is an elderly worker who is a bit harder to spot around the harbor.
Azusa Kayama is a lot easier to meet, as she is the secretary sitting in the office.
And finally Izumi Sunaga and Takako Michii are similarly dressed administration clerks who seem to hang out in the Harbor Cafeteria a lot.

And to really get to know all these people, here are the pictures from the character database.
They aren't exactly quality since they are very small by nature but they do help out.