Shenmue created a digital world with every aspect of daily life. Street lights are one of them. 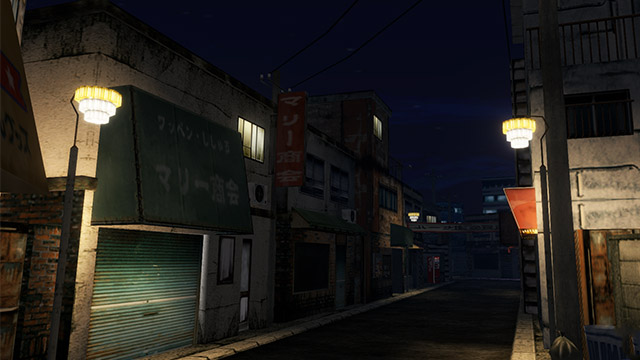 And the lights that illuminate Dobuita's main street stand out with their design for a good reason.

Shenmue really pushed day and night cycles when it came out 20 years ago.
One big factor that really helped with the visual impact are of course the lights.
When it gets dark they flicker to life and the scenery completely changes its appearance.

There are loads of lights in the game with all sorts of purpouses and shapes. Most of them are pretty dull in design, including many of the street lights. But the ones on Dobuita's shopping street are quite unique. Since the game puts a lot of focus on the lights during the nightfall scenes, which mostly tend to happen in Dobuita, every player's eyes got hooked on them at some point.


They really do stand out from the crowd of lengthy metal enclosures with fluorescent tubes or those with round caps and bulbs, creating spot lights. These Dobuita street lights spread their soft light out in all directions with their "upside-down wedding cake" design, which should more appropriately be called "chandelier design". Certainly are interesting to look at things for a street light.

This design is not something random (albeit nice) that the developers just made up.
It just so happens that those lights, like so many things in the game, have roots in real life.

This was taken in Yokosuka around 75 to 77 and is in the Honcho district, the famous bar area where you certainly could find some sailors. So pretty much just where the real Dobuita street is.

Given that the photo is about 45 years old, the fidelity and dynamic range aren't the greatest.
But you can still make out the iconic shape of the street lights with their three stacked circles that get smaller towards the bottom, giving that chandelier vibe. It's even possible to just about make out that the top ring is yellow, just like in Shenmue. And if you look really close at the construction of the post holding the fixture, you'll see that even that is shaped very similarly to the game's lights.

It was pretty hard to find many photos of these light fixtures or any info at all surrounding them.
One thing that is clear is that the street lights around this area have been replaced with more modern ones at some point and can't be seen anymore. Cannot say when they went out of service but since they are in Shenmue there is room for quite some speculation.

Clearly the developers put the right kind of street lights into Dobuita when they recreated it for Shenmue. So they might've still been around in the late 90's when the game was made.
It is at least very likely that they were still around in the late 80's, the time where Ryo's quest takes place. In that case the team must've remembered these or looked at some old photos (of which they surely had way more than I can find now). In any case they really did their homework and it just shows again how much Shenmue cares for details in every aspect of anything.

I'm going to leave you with a close-up of one of Shenmue's lights at night and a close-up-ish crop of the only other photo showing these lights that I could find. It at least shows the fixture a bit better.