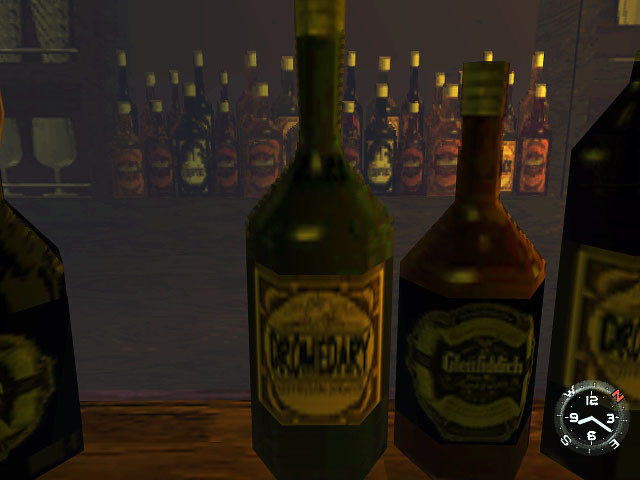 But there is one more brand in the game that doesn't seem to get mentioned anywhere.

Inside the bars of Dobuita you can spot a range of different bottles, as one would expect from such a place. Given that this is Shenmue, there is of course quite a lot of care and variation in these bottles to make those places richer in detail. The above screenshot was taken inside Heart Beats Bar as an example.

Most of the textures have been created from scratch, like pretty much everything in the game.
But for some reason one bottle design looks quite a bit more lifelike than the others. In case you haven't spotted it already in the opening image, zooming in and brightening it up will sure help. 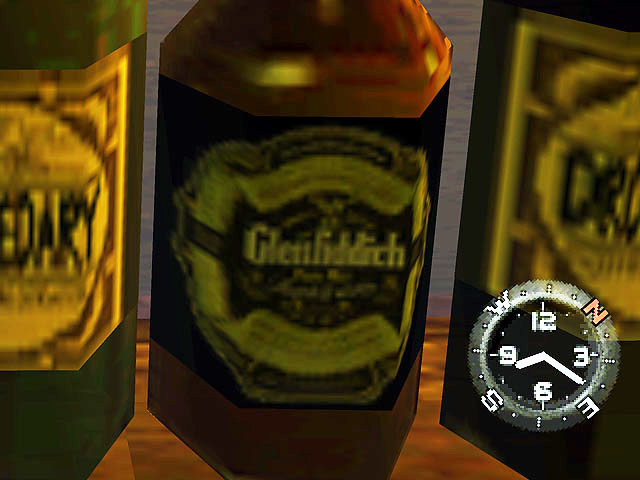 It may still be a pretty blurry low resolution texture but it unmistakably says "Glenfiddich".
That is the real life brand name of a well known single malt whiskey producer based in Dufftown, Scottland. Not only is it the brand name that is true to life, but so is the entire label on the bottle.

After spotting this in the game I started looking around for pictures of Glenfiddich bottles and sure enough I quickly found one that matches strikingly well. The shape might be different but the label surely is a match as close as it could possibly be for such a thing. 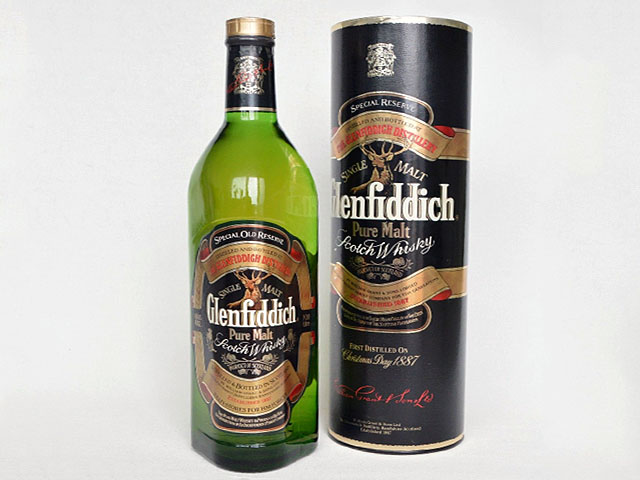 I can't say with certainty what era the label in the game was taken from, as it could be either from the 80s, to fit in the game, or from around 1999, as that is what the developers were most likely to get a hold of while making the game. But the particular example above has supposedly been bottled in the 80s which kinda fits into both possiblities as drinks like this typically stay bottles for a long time.

Back when the game came out, it was pretty hard to make out the detail of this texture, given the limited resolution of not only the texture itself, but also the image output of the Dreamcast and the average TV of the time, save for the rare high quality VGA setup. You also had to explore the surroundings well and look hard to even notice these bottles but there is just no mistake that they in fact just took the label of a real life bottle and slapped it on to one in the game.

With Shenmue I & II around the corner, displaying the games in a much more crisp 1080p it is much more likely that this will be noticed by the players. Increased resolution has been an option for many years with emulators but those aren't everyones cup of tea.

More importantly Shenmue I & II are a rerelease and Sega have decided to not renew even the official licenses and there has been a lot of work on the games to bring them over to current hardware. So the extra question beyond all the "why did this slip through everything" now is, have d3t worked on this little texture to avoid any possible strike for copyright infringement?

Turns out that there already is a possible solution in Shenmue II.
The bars there still use the basic texture set found in Shenmue and some bars still have the Glenfiddich styled ones. However, this time the label has been edited. The design is still mostly intact but it ditched the real brand name for something generic that has been made up. 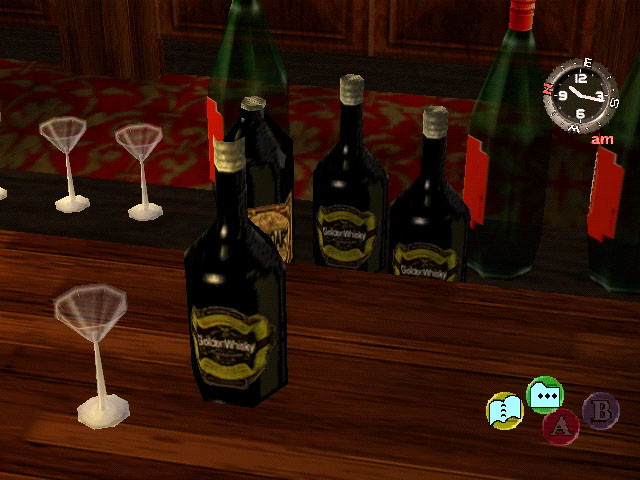 Insterestingly, the texture used for the shelves behind the bartender, that have a mixed assortment of bottles, still have some with the original Glenfiddich logo on them. These are however even harder to spot and even lower resolution, aswell as many bottles being mirrored. So you really need to know the logo in order to spot it there.

Transfering this texture over to Shenmue would be the most efficient and elegant way to get rid of any possible problems. I certainly hope that this was, is and never will be an issue for Shenmue in any way. Nevertheless this is definately one of the most interesting overlooked details.
at July 29, 2018