The Angry Video Game Nerd and Shenmue don't seem like two things that could ever mix together. 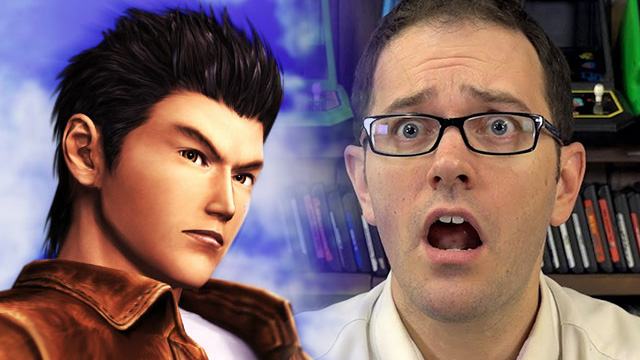 There are good reasons to mention both in one sentence however, as links have been established.


James Rolfe, aka the AVGN doesn't need much of an introduction. He is one of the biggest internet phenomenons and the original bad-game-reviewer on Youtube, with a 15 year long history.

He is mainly known for tearing up NES games and his favorites were always movie tie-ins. So Shenmue doesn't seem like something the AVGN would ever touch in any shape or form in his videos. While Shenmue was controversial with some people, it was nowhere near bad or even old enough for the Nerd's show in the early 2000s.

As the years went on the formular of AVGN episodes loosened up however and more modern games from other platforms appeared more and more often. It also became apparent that games don't need to be straight up awful for the Nerd to tackle them. Examples like Moonwalker, Seaman and Paperboy show that games just need something interesting for him to talk about.

Then, in December of 2017, something interesting happened during that years' christmas episode.
While reviewing the Playstation game series Lightspan Adventures he makes a joke about how just reading something fixes problems instantly. For a visual he flips through some gaming magazines while yelling that they cleared up his problems.

Those magazines are apparently picked at random but it is very striking that the first one he happens to grab is the November 2000 Issue of the Official Dreamcast Magazine, which is just the right one as it has Shenmue as the cover story, with a picture of Ryo on the front.


It was very nice to see Shenmue in an AVGN episode, even if it was just the the smallest and most remote glimpse of anything about the game. As the Nerd has a large collection of all kinds of stuff and just about any random gaming thing in his reach, this didn't seem to have a deeper meaning.

Much later, in March of 2019, video game magazines made another appearance on the AVGN.
This time the entire episode was dedicated to those and out of nowhere Shenmue made another strange appearance on the show. It wasn't the Dreamcast magazine from the earlier episode again, nor was it print media of any kind. Instead it showed up when the Nerd talked about how in todays day and age, you can just look up anything and everything gaming related on the internet. And to represent that he chose to put a news item on Shenmue III from Den of Geek on the screen.


This seems like much less of a random pick. With so much stuff getting published about all sorts of big name games, why would he just choose something from a somewhat niche game? Shenmue III was of course a hot enough topic at the time but I can't shake the feeling that the Nerd specifically hand picked this news item for some reason.

Something seemed to be in the air with the AVGN and Shenmue...

Finally in June of 2019, all but the hardest doubts if the AVGN really knows about Shenmue were put to a rest. In the episode Superman 64 Returns during an epic ending skit, an evil N64 cartridge starts to shoot lasers out of Superman's eyes, which the Nerd narrowly avoids.
The laser then proceeds to aim at a bunch of games to destroy them. Amoung them are many things everyone already knows the AVGN owns and likes, like A Link To The Past and Mario 3. But also, way out in the corner there is the game case of... Shenmue!


This was truly mind blowing but the icing on the cake was that the Nerd actively points out that he likes Shenmue. Yeah it might still be indirect but there is nothing random about this cameo of the actual game itself anymore. To me this leaves no doubt that James Rolfe does have a history with the game.

The only question left is how much of an history he has with it. When did he first play it? Or did he just ride on the wave of hype around it and has (or had at the time of that episode) yet to play it?
When will Shenmue really be featured, with actual gameplay footage on screen and some statements about it? Maybe even get its very own episode?

Like stated above, the AVGN gravitated away from just terrible 8-Bit games and is way more open.
The ultimate example is what came right after Lightspan Adventures. Earthbound (SNES) was a video about a properly good game that the AVGN honestly enjoyed. It just gave him enough wacky material to talk about and grant an episode.

Shenmue also falls into that specific catergory quite well. It's a cult classic, it's quirky with its dialouge and the sailor jokes and can certainly result in an interesting episode. While I don't actively want to wait for such an AVGN epsiode, I do hope that it will happen in the near future. Even though he might hate on certain aspects of the game for comedic effect more than necessary, I'm way to anxious to see him tackle our favorite game and give it some exposure while doing so.

And just to make your head spin, think about this: Shenmue is now 20 years old. Simon's Quest was only 17 when the AVGN featured it in his first episode. If that doesn't make Shenmue retro enough by now, I don't know anything anymore.
at August 02, 2019