In the Pine Game Arcade you can spot a rather crudely modeled car on the counter. 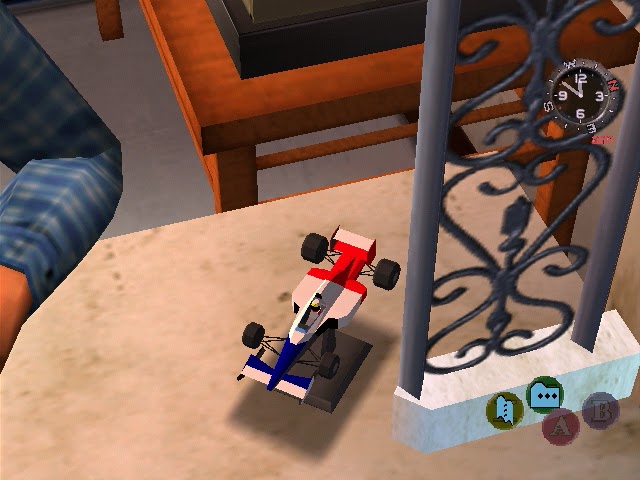 This little model of a Formula 1 style race car is no random thing that got put there.

It is of course a nod to Sega's famous arcade game "Virtua Racing". While it has no specified name in the arcade, it is called "Formula" in the 32X version, giving it at least something to go by.

Virtua Racing was the first game to run on the new Model 1 platform and the first Sega game with fully polygonal 3D graphics. While it wasn't the first racing game to so, being predated by Namco's Winning Run by a good 4 years, it massively raised the bar of how such a game should look with its much higher polygon count and silky smooth 60fps, running in widescreen even.


Even though it was never very finacially viable because of the incredibly expensive hardware and later overshadowed by the insanely popular Daytona USA it was still a succesful release and a milestone in 3D gaming. Perhaps the most amazing bit is that it was actually never meant to be a full game. The inital concept behind it was to merely be a testbed to see how viable the hardware could really be for the fast and smooth rendering they wanted for their games. The concept prototype was so popular among the internals at Sega that they eventually decided to make a full game out of it and release it to the public.

But what is the deal with putting a reference to it into Shenmue II?
Well of course it was none other than Yu Suzuki himself, who was the leading Designer of Virtua Racing. Interestingly this model is not taken from a capsule toy or rather vice versa, like the other cars in the game or the Fighter Jets. Like that F-14 model and the Hornet from Daytona USA amoung others, the Formula could've easily been a part of the AM2 machine or the Sega one.

But it only made it on the counter of the arcade. I bet they wish to have a game from 5 years in the future. In any case it is one of those nice little, yet easily overlooked details in the world of Shenmue.