The Mystery Of Warehouse No. 4

Have you ever checked all the warehouses around Fortune's Pier in Shenmue II? 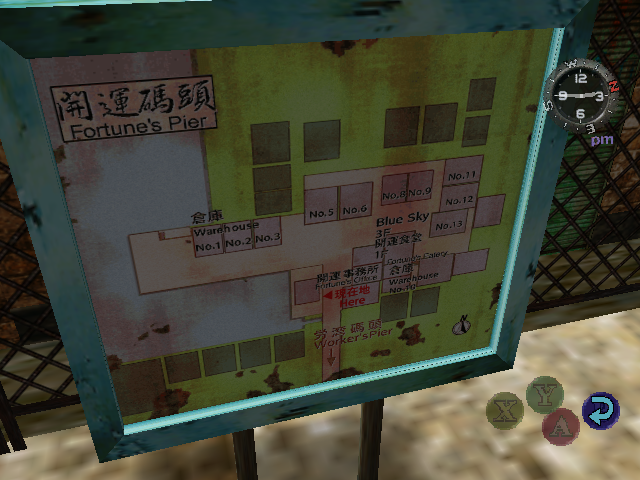 If so, have you ever wondered where some of them have gone and why?

If you look at the above map of the area you'll find that the Warehouses go all the way up to No. 13 and that their arrangement is somewhat odd with gaps inbetween the buildings leaving not just an empty space in the area but also in the numbers. If you look closely you can spot No. 10 in a remote location but not 4 or 7. It is interesting that there is no No. 7. After all it's the lucky number and the area is called Fortune's Pier so it's only fitting. Or is it?

In China the number 7 is sometimes considered to be the exact opposite and rather unlucky.
The number 4 is even more unlucky and treated as notoriously bad in China as it sounds similar to the word for "death". Many buildings omit the 4th floor and there are other instances where it is just left out. Since Shenmue II is set to take place in China it actually makes sense after all that they left out both 4 and 7 in an area that is named after Fortune, though they should've also left out 13 to make it absolutely void of unlucky stuff. Anyway the actual mystery only starts here...

If you go on a hunt and keep your eyes peeled you can still find something. Now you won't find anything tucked away in a corner if you just wander around the area but if you pay a visit to the F Warehouse there is something to discover. While the area has no real use outside of a certain cutscene and there is nothing of value in it, there is still something interesting to see when you look to the left once you went down the stairs.

So there is a door to a No. 4 warehouse after all. It's in a really strange place and it's not entirely clear if there is even supposed to be anything behind it. It could very well just be a nonsensical placement. If you think really deep about it there could actually be some meaning behind No. 4 being down here. With the number linked so closely to death and the thing being underground it seems that there is something to it. Or maybe I'm just thinking way too hard.

But it gets even stranger from here on. Let me bring your attention to this warehouse door.

It can be found behind the row of warehouses shown in the second picture. It is situated directly behind No. 3, transversly to it and if you were able to walk through the wall at the end of the empty space (e.g. mod the game) and look to the left you'll be able to see this door.
This texture with no number written on the door can be found on the back of a bunch of warehouses around this normally unreachable area and there is nothing special about it... yet.
But watch what happens when we switch over to the Xbox version.

Suddenly this building becomes another Warehouse No. 4 or even "the" Warehouse No. 4, considering that its door actually makes sense, being on ground level and everything.

This is clearly not the same texture that is used for the door in the F Warehouse. All other warehouses next to it  just use the same generic texture that you can see in the Dreamcast version for this very warehouse. So someone must've created or at least found this texture among the assets and slapped it on this door. A door that the player will never see, unless he breaks the game. And it takes a lot of effort to walk here with glitches and only the step by step method of inching your way forward through the void. Trust me, I had to do just that to get here, since I cannot mod on my Xbox.

The Xbox version of Shenmue II is filled with very strange little changes to various graphical details and I know what and oddball it can be. But this is among the strangest things it does.
I cannot think of any reason why anyone would ever spend time on a change like this and it makes me want to know even more yet again what the hell was going on when they ported the game.

This search for the supposedly missing warehouse has originally been carried out by Brian of Park Productions during his great efforts of taking screenshot to compare the DC and Xbox version of the game for his website many years ago. The site has since been redesigned with the miscellaneous stuff, that included this find, not up again by the point of writing this. Still, Brian was nice enough to help me out with this by giving me information on this.

If you haven't yet, please go visit his Shenmue II Differences website and check out his great work.