In the Green Market Qr. there are these two butchers who are in fierce competition for customers. 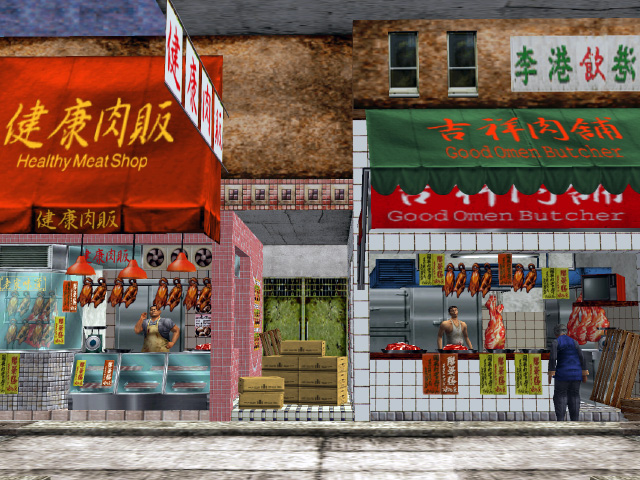 Well, it's only natural to be in a deep rivalry when you sell the same thing as the guy next door.

The Healthy Meat Shop run by Taiyuan Guo and the Good Omen Butcher owned by Wentai Zhou are actually among the most eye-catching and prominent stores in the entire area as they are situated in a junction and you walk straight towards them every time you come from Aberdeen and want to go further into Wan Chai.

They are also mentioned by Wong and drawn on his map so they are a big point of interest and it will come naturally to talk to at least one of them while looking for the South Carmain Qr.
No matter if you pick Wentai or Taiyuan the first thing you'll hear from both is not to deal with or even talk to the other one. Sometimes they will even go as far as to spread lies about the quality of the others meat, like saying it's rotten or originates from some strange source.

An early flowchart featured in the Shenmue Artbook, which has been translated by Switch
gives the rivalry an even deeper element, where Ryo would've been dragged into an argument between the two and depending on who he chose to speak to first, would lead him into one of two possible directions with a little split in the quest to reach his destination.

This didn't make it into the game but there is one more detail about their rivalry to be found.
When you're coming from the Come Over Guest House and walk around the corner towards the steps leading to the store you can spot a peculiar sign on the side of the building to your right.

It's a bit hard to make out, especially for all of use who can't read Chinese but if you compare it with the signs around the area you can make out what it says.
The original sign written in black says 健康肉販 which means Healthy Meat Shop. But someone clearly thought that the sign should read and in fact lead you to something else. Turns out it will only be a few steps away from the original point of interest, as it is of course the dirty work of Wentai and it now says 吉祥肉舗 meaning Good Omen Butcher. One little detail about this is that in their original Chinese names both stores share 肉, the symbol for meat, so not the entire sign had to be covered, which makes the whole thing even more amusing.

If I had to choose between the two I'd probably buy at the Healthy Meat Shop. Taiyuan always seemed more trustworthy to me, even if only just by the slightest bit. But after finding out about Wentai's shady business practices he lost even more ground, though they do make me chuckle.
at January 14, 2018