We all love Yu Suzuki's arcade masterpieces featured in Shenmue and Shenmue II, don't we? 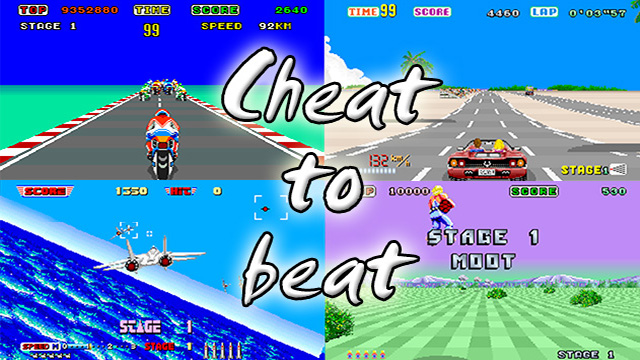 Showing the love by finishing them is hard though. But I've got a solution, if you really want to do it!

The wish for helpful cheats in the YS arcade games mainly comes from the shooting games.
Hang-On and Outrun are tough enough to beat but they are doable with enough practice.
For one thing they are very short. Their credit systems also make them a lot more "1CCable".
Space Harrier and After Burner II are whole different animals though. With their sheer amount of stages they take 3-4 times as long to finish. But what really makes them hard is that they work on lives. Putting in more coins gives more lives to continue playing and that turns these shooters into absoulte quarter munchers. They really are by design and become almost inconceivable to beat with just one credit. Especially After Burner II, which is marvelous but almost impossible to play with its extreme speed and explosions that make the incomming missle barrages crazy hard to avoid.

I was looking into the games with Cheat Engine a couple of times, especially after Shenmue I & II hit the PC and made it even easier. But I never had any luck with finding the life counters.
With the nearing release of Shenmue III, the desire to really mop up everything that I still had to do in I & II really grew to an intense level, so I gave cheating another try. Naturally I started with After Burner II as I can safely say that I will never be able to beat it with just the 2 extra lives.


Again I was having no luck searching for the amount of lives in memory and ran the results lists dry.
It then dawned to me that I had to broaden the search approach. As I was really just clueless what the game was doing, I started from an unknown initial value and continued with decreased as the lives went down and increased after starting another round. This took lots of continuos games until I finally figured something out. The three lives you start with are actually a value of 768 in memory and with each life you lose, it goes down by 256. No wonder I never found anything with my noob searches of looking for values between 1 and 3, representing the lives directly.

With the knowledge of how After Burner II handles its life counter, it was then very easy to apply that to the search in Space Harrier. It really took me about only 30 seconds to find the address that stores the lives as it did in fact work in the same manner.

Since I really felt like I was on a roll, I immediately turned my attention to Outrun.
Even though that game is easy enough to beat, at least now for me, it was still worth giving it a shot.
The thought process here was a little different, as this game is all about time, not lives.
The search for the address of the timer was done in the same way as before however. What made this a lot simpler and quicker was the fact that I could search every game second and with 75 of them at the start, I really only needed one game. The value representing the time was again not what you see on screen but 503346432 and to get to 99 seconds I had to fiddle around until I landed at 503355656. Strange indeed, might be my sloppy work. But since it works fine it really doesn't matter.

Hang-On was again approached in the same way but with vastly different results yet again.
For this one the timer was actually hard to even find, as it only showed up after searching for single bytes. In Hang-On the time is stored as an hexadecimal value, so the 75 seconds show as 117.
The real problem here was that the address containing the value wasn't fixed, so I had to let Cheat Engine do a pointer scan, which I had zero experience in. Luckily just picking the first result that came out already did the trick and with that it works every time the game is launched.

After all four games had been figured out, the only thing left to do was getting the cheats to work with the two machines in the You Arcade in Shenmue aswell. This was simple enough and after everything had been done, I saved the cheats with some handy hotkeys to some cheat tables.


Alright, enough about the history on how this came together. Lets get to the cheats and how they actually work. All the cheat tables have been made for the Steam version of Shenmue I & II.
The cheats work at the in-game arcade machine locations and also in the Shenmue Collection.

Using them is very simple and easy to understand. You only need Cheat Engine and the cheat tables I provided. If you have the program installed, you can just launch Shenmue or Shenmue II and then double click the cheat table you currently need, to bring up Cheat Engine. Inside the program you need to click the computer icon with the magnifying glass in the top left and select the game from the processes. It will ask you if you want to keep the list and you click yes.

From there you can use the hotkeys that I assigned to the controller. They have been made with Xbox controllers in mind, so if you have something else you might need to edit them. If you don't like the amount of lives or how the cheats do what the do, you can of course also change that to your liking. I won't go into details here but this is really easy to figure out.

Once you are in the game the RB button will set the extra life counter to 5 in Space Harrier and After Burner II and the time to 99 seconds in Hang-On and Outrun. This means you get twice the amount of lives and 24 seconds extra from the starting line respectively. This could already be enough to beat the games but if not you can also use the LB button to freeze and unfreeze your lives/time.


There are a few things to keep in mind. You can reuse the cheat on the RB button if you are about to run out. The life counters may not immediately change and only update after you die or may not do so at all until you are back down to the amount of lives that the game shows you. For an immediate check if they work it is best to press RB on the title screen and start with the extra lives.

The time cheats in Hang-On and Outrun will always give immediate results.
Only thing you should be mindful about are the checkpoints. If the extra time you gain from them increases your timer beyond 99 it will overflow and actually go down. This generally doesn't matter much if you are low on time or have a lot of it. But if you reach a checkpoint and the remaining time and bonus add up to exactly 100, the result will be 0 for the game and you'll instantly be out of time.
Also, in both games the checkpoints give slightly different amounts of bonus time depending on the stage. That makes judging the limit of what you can have left tough. If you want to be on the safe side, just don't pass a checkpoint with much more than 30 seconds on the timer.

The cheat tables have only been tested on my system an a single other one. They work perfectly on both of them but I can't say with 100% certainty that they will do it for everyone. I am pretty sure though that they will do their job. With that said, pick them up, test them, let me know what you think and most importantly... Show the games who's boss and snatch those toys and certificates!

Just one last fair word of warning: If you make them too easy for you, you might rob yourself of a chance to ever get good enough at them to beat them for real. So why not also use the extra time and lives for practice! You are free to leave After Burner II out of that however. Not happening legit.
at October 20, 2019